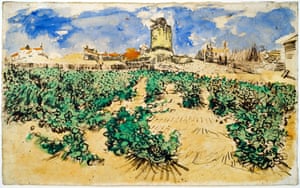 A landscape by Vincent van Gogh is to be exhibited for the first time in more than 100 years following the discovery of crucial evidence that firmly traces back its history directly to the artist.

The significance of two handwritten numbers scribbled almost imperceptibly on the back had been overlooked until now. They have been found to correspond precisely with those on two separate lists of Van Gogh’s works drawn up by Johanna, wife of the artist’s brother, Theo.

Johanna, who was widowed in 1891 – months after Vincent’s death – singlehandedly generated interest in his art. She brought it to the attention of critics and dealers, organising exhibitions, although she obviously could never have envisaged the millions that his works would fetch today.

Le Moulin d’Alphonse Daudet à Fontvieille, which depicts vivid green grapevines leading up to a windmill with broken wings in the distance, is a work on paper that he created with graphite, reed pen and ink and watercolour shortly after he reached Arles, in the south of France.

It dates from 1888, two years before his untimely death. Windmills and vines were among his most beloved subjects.

Van Gogh, one of the greatest figures in Post-Impressionist painting, worked on paper as he excitedly awaited the arrival of his artist-friend, Paul Gauguin. He wrote to Theo that he wanted “canvas in reserve for the time when Gauguin comes”.

Research into Le Moulin d’Alphonse was conducted by James Roundell and Simon Dickinson, British art dealers, in collaboration with the Van Gogh Museum in Amsterdam.

They will be unveiling it at TEFAF Maastricht, arguably the world’s most prestigious art fair, opening in the Netherlands on Friday. They have set the price “in the region of $10m (£6.6m)”, which tallies with the figure fetched by a comparable work sold by Sotheby’s a decade ago. The vast majority are in public collections.

Following definitive authentication a landscape drawing by Vincent Van Gogh is set to be unveiled at TEFAF Maastricht, going on show for the first time for over 100 years, the Guardian reports. The artwork has been valued at $10 million.

The graphite, ink, and watercolor on paper shows a splendid green vineyard with a small village in the background, under a vivid blue sky.

Extensive research conducted by the British art dealers James Roundell and Simon Dickinson in collaboration with the Van Gogh Museum in Amsterdam found that two almost illegible numbers scrawled on the verso corresponded with those found on two separate lists of Van Gogh’s works compiled by Johanna, the wife of the artist’s brother Theo.

Johanna is credited with popularizing her brother in law’s work after his death in 1890.

Roundell, a former head of Impressionist and Modern Pictures at Christie’s said, “She set about trying to build a legacy for him. She could have just burned the lot because, at that point, Van Gogh had no real market.”

He explained that the number “5″ corresponds with a list she wrote in 1902, and another number with a list from 1912.

He told the Guardian, “You’re getting a double reinforcement of lists that come direct from Johanna,” adding “I’m excited that we’re able to bring to light information about a drawing which really wasn’t known.”

The drawing has been held in private collections in Europe since it was last displayed in Germany, in 1910.