Art Fairs: From Forum to Frieze

As we head into this new year, art lovers and professionals alike start gearing up for the next round of art fairs around the globe, including ourselves! With over 400 occurrences per year, art fairs constitute one of the crucial elements of the global art market, essential for business, trade, forming new relationships and strengthening existing ones. But, looking back long before this became the norm for modern day art transactions, how did art fairs initially come about?

It is generally believed that the foundations for art fairs were laid down during antiquity through events which would bring people together from all over the globe, such as religious festivals or pilgrimages and artisanal fairs. Needless to say, these events sparked an increase in commerce and the creation of international markets.

The first ever fair to be specifically designed for the display and sale of art opened in 1460 in the courtyard of the Cathedral of the city of Antwerp which had become an international hub for trade and fairs, with an exceptional number of foreign merchants settling in the city and exporting globally. This new model favoured the rise of the professional art dealer, an individual who had the education, social capital, and man-power to organise and build ties with buyers and artisans from other countries. The 19th century marked the establishment of the many World Fairs across the globe, the first of which was held in 1851 in London within the iconic Crystal Palace and attracted around six million visitors. These events were mainly aimed at promoting scientific and industrial demonstrations from around the world; they still, however, allowed the inclusion of art, exemplified by the Exposition Universelle of 1900 in Paris which brought international attention to artists such as Cézanne, Rodin, Picasso, and the Art Nouveau movement. Five years earlier, in Venice, the City Council had inaugurated a biennial exhibition of Italian and international art, now known as the Venice Biennale, with the aim to establish a new market for contemporary art. In the following centuries we witnessed the growth in popularity of the commercial art exhibition model which originated in France in the 17th century with the Salon, which arguably constituted the greatest annual or biennial art event in the Western world until the end of the 19th century. Across the channel, the UK also started favouring this model, leading to the creation of the Royal Academy of Arts. Since 1769, the RA’s Summer Exhibition has been held every year without fail, making it the largest continuously staged open submission art show. 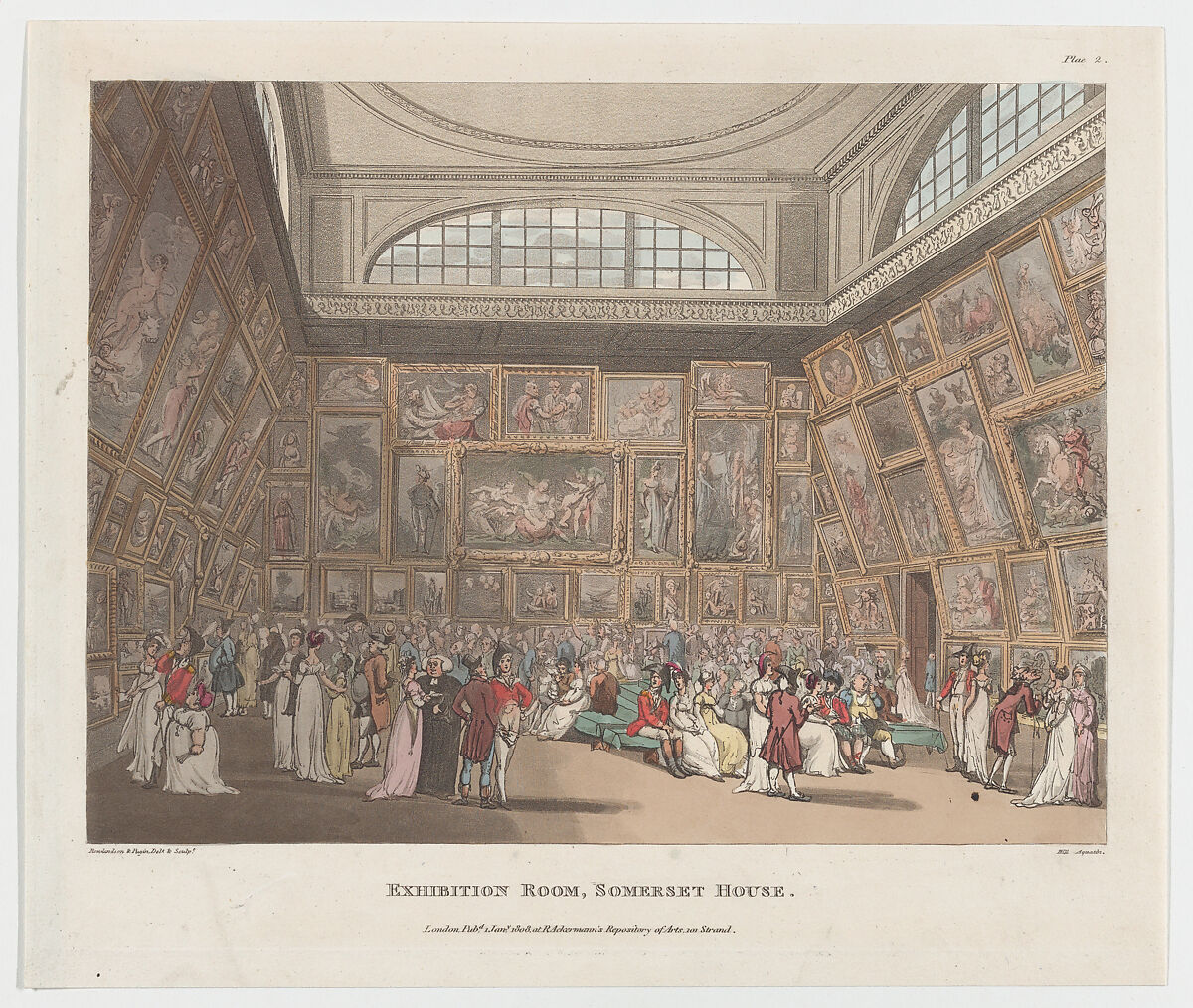 A turning point for the art market occurred in 1913 with the Armory Show in New York, the first large exhibition of modern art in America. Over the course of a month, the show displayed works by 300 artists, including Vincent van Gogh, Henri Matisse, Paul Gaugin, Edward Hopper, and Marcel Duchamp. The show was responsible for introducing the American public to the radical practices of the European avant-garde and set the stage for the evolution of the modern art market in the United States. 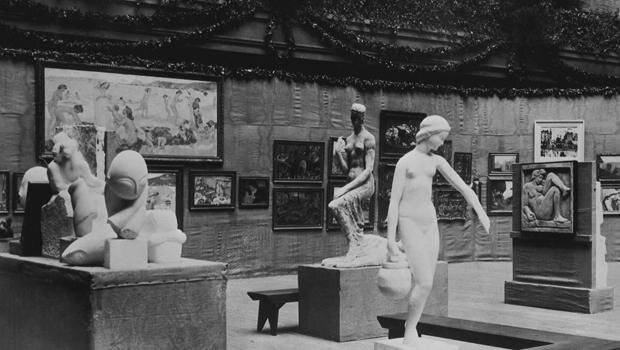 In 1925, the Exposition internationale des arts décoratifs et industriels modernes was held in Paris to celebrate modernism in all its forms: architecture, interior design, the decorative arts and jewelry from throughout Europe. Its title led to the widespread adoption of the term ‘Art Deco’ to describe the emerging modern style. The fair featured 15,000 exhibitors from 20 different countries, and it was visited by 16 million people during its seven-month run. If only we could duplicate those numbers today! It was located between the Esplanade of Les Invalides and the entrances of the Grand Palais and Petit Palais with the Eiffel Tower in full view. Constructed in 1889 as the entrance arch to the World’s Fair the same year, the Eiffel Tower became the symbolic manifestation of French modernity and urban renovation in Paris in the first decade of the 20th Century. It was a source of inspiration for many painters, including Robert Delaunay who began his Tour Eiffel series in 1909 and returned to the theme again in the 1920s. In 1925, he painted La Ville de Paris, la Femme et la Tour Eiffel specifically for the exposition where it was included as part of a scheme to decorate the Pavillon de Tourisme. Arguably one of the most important works from the series and the tallest, at four and a half meters high, fast forward 92 years and Dickinson proudly exhibited and sold this picture at TEFAF New York in 2017.

The first art fair in the modern sense – that is, an event organised by and for commercial galleries to exhibit and sell art – occurred in Cologne in 1967 with Art Cologne, originally known as Kölner Kunstmarkt (Art Market Cologne), closely followed by Art Basel, which had its first edition in 1970. The birth of the art fair stemmed from a need to build a thriving market in smaller European cities, to match and compete with cities like London, Paris and New York, which had long been established as major artistic hubs.

The first art fair at which Dickinson participated was TEFAF Maastricht in 1998. It originated from two Dutch fairs launched in the mid-1970s: Pictura and De Antiquairs International. These fairs merged in 1985 and TEFAF was first held in 1988. Ever since, Dickinson has had a rich history of participating at art fairs including TEFAF Maastricht, TEFAF New York, Masterpiece, Frieze Masters and, more recently, the Florence Biennale Internazionale di Antiquariato (BIAF). Clockwise from top left: G.B. Moroni, Portrait of Prospero Allessandri, 1560, oil on canvas;  G. Bellini, Madonna and Child, c. 1480, oil on panel; Jan Mostaert, The discovery of America, oil on oak panel; J. de Bray, David and the return of the Ark of the Covenant, 1670

Art fairs have been essential to Dickinson’s business for many reasons, and have facilitated the sale of numerous masterpieces to both public and private collections. Collectors and institutions travel with purpose to art fairs and the gallery’s successes are represented by a diverse group of sales of Old Masters, Impressionist and Modern works: Art fairs have been crucial in changing the way galleries and private dealers operate. Bringing together thousands of visitors, from private collectors to museum curators and trustees – who benefit from the convenience of a ‘one-stop-shopping’ experience – they are an ideal platform for buying and selling. They also allow galleries to meet new clients and increase their outreach. This aspect of art fairs encourages galleries and dealers to showcase some of their finest works, in order to inspire competitive collecting as well as to outshine fellow exhibitors. Many dealers create curated or themed stands which serve as small exhibitions, inspired by those held at museums and often working in conjunction with curators. Compared to selling at auction, art fairs allow vendors a greater deal of control, as the ultimate decision to accept or reject an offer is in their hands. Moreover, art fairs also encourage greater transparency: more and more, galleries are posting prices on their labels and disclosing their commission structure, a practice Dickinson has long followed as we believe this leads to a more productive and transparent conversation.

In recent years we witnessed the rise of the virtual art fair and online viewing rooms, platforms which were already in place before the pandemic to enhance the physical art fair experience. Whilst lacking face-to-face dialogue with dealers and direct engagement with the artworks themselves, they have encouraged a number of benefits, such as price transparency and the making of art accessible to a wider public.  It is hard to predict what the future of art fairs will look like, especially as the world at large reels from the effects of Covid on large gatherings. But one thing is certain: the art fair model has endured and evolved throughout the years. We see no reason why it should not continue to do so for many years to come and we invite you joins us at the following fairs in 2022 to come view, learn and collect:

If you wish to continue your reading on the history of art fairs, we highly recommend art market journalist Melanie Gerlis’s insightful book The Art Fair Story: A Rollercoaster Ride – Hot Topics in the Art World (London, 2021).